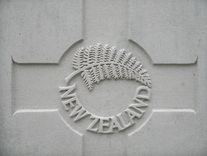 Introduction
In the six dark years of World War Two, from 3 September 1939 to 15 August 1945, a total of 3,687 Royal New Zealand Air Force (RNZAF) personnel lost their lives on active service, the majority in  Bomber Command squadrons of the Royal Air Force..... 38 have found a resting place in our province,  the Province of Fryslân, The Netherlands.
Our website is dedicated to all airmen of the Royal New Zealand Air Force who gave their life for our freedom.

This website was officially launched on ANZAC Day, 25th April, 2012.

RNZAF Wargraves in
the Netherlands

In the years to come, we aim to visit and photograph all Royal New Zealand Air Force War Graves and Memorials in the Netherlands and present the photographs on this website. In the autumn of 2012, whilst walking the 'Airbornepad', the long-distance walk from Lommel (Belgium) to Arnhem, the Commonwealth War Graves Commission's Cemeteries of Mook, Groesbeek Nijmegen and Oosterbeek were visited.
The first photographs are on:
Netherlands - New Zealand War Graves